The Short Scar Facelift is a new Development in Cosmetic Facelift Surgery.

The difference between this procedure and a full facelift is that this procedure will not correct the lower part of the face, such as sagging and loose areas under the chin or in the neck area.

However, it is excellent for those seeking rejuvenating effects of the upper face -- eyes, cheek, nasolabial area, and even the jowls. This procedure can restore the youthful contours to the Shape Of The Face. And it's a fairly quick procedure ....... taking about 1-2 hours and is usually done under general anesthesia.

The short-scar facelift (or mini facelift) repositions the dermis and internal soft tissue. It also helps reduce scaring, especially behind the ear -- as caused by a traditional full facelift. This is important factor for men and especially women who like to wear their hair up or off their neck. 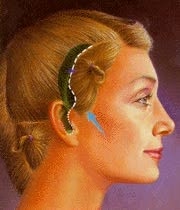 This technique minimizes the incision at the earlobe and eliminates the distortion of sideburns. To do this, Dr. O'Connell makes a horizontal dart type incision just below the sideburn area.


The Advantages of a Short Scar Facelift

The advantages of this type of surgery is that the scar does not extend into the scalp above the ear -- reducing the risk of hair loss.

Also, the scar stops in the earlobe crease and not in the scalp behind the ear which could often results in a thickened scar -- a problem for men and women with short hair or women who were their hair up or in a pony tail.

Other advantages include - absorbable stitches -- no staples required. Recovery is also quicker and there is usually less bruising due to limited skin elevation which reduces risk of blood or fluid collecting under the skin.

In addition, this procedure is a good option for younger people who just want to maintain their youthful look and it's also a nice alternative to older folks who want a lite anti-aging boost. Plus, the local anesthesia is also a better option for those with minor health questions.

The cost of a short scar facelift is similar to a mini facelift. See Average Costs of Plastic Surgery